Meet Dorian Gray. He enjoys just about everything and in copious amounts. Like any quality gothic anti-hero there is a whisper of a family history that involves passion, death, scandal and abuse. Whilst there is an idealised image of the guy there is something more damaged and vulnerable that is ripe for Lord Henry’s exploitation. As a muse for Basil, he has been the source of pure inspiration, but that is about to change.

Does he survive the novel? No

Dorian seems to be motivated by curiosity, vanity and a diabolical indulgent streak. His lack of care for those around him begins with the flippant way he treats Basil’s affections and then plays out in the most devastating fashion in his treatment of Sybil Vane. The capacity for this cruelty was always within Dorian, Basil mentions it in the opening chapter, Lord Henry simply offers new possibilities. Lord Henry is still one of the most terrible and unfortunate influences a young man with Dorian’s particular flaws could come across. Appealing to Dorian’s curiosity and desire he exposes him to the seedy underbelly of London and deploys witty epigrams to stun him into believing that it is all perfectly acceptable. I’m not sure that Dorian is particularly intelligent. He does seem to be easily confused. 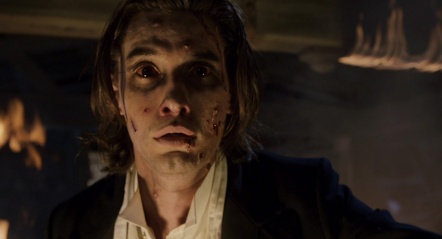 Dorian as the Destroyer

The guy seems impervious the damage he is doing. He does not seem to care that, whilst he has been given a free pass by swapping fates with the portrait, none of the people he corrupts or endangers has such a reprieve. He leaves a trail of ruined men and women, some who have become addicted to drugs that he introduced them to, or have a had to turn to sex work because he destroyed their reputations. He is not permitted into high society as he once was, excepting the society of those who tolerate Lord Henry gladly. His destruction and degradation of those around him only begin to gnaw away at him after Basil’s death, and it is largely for selfish reasons. He doesn’t like feeling guilty or being tied to the loathsome visage of the portrait so he tried to follow a path of redemption. When these attempt at redemption don’t yield immediate results he cannot handle it and throws a tantrum, stabbing the picture and bringing about his own demise.

“You know how a voice can stir one. Your voice and the voice of Sibyl Vane are two things that I shall never forget. When I close my eyes, I hear them, and each of them says something different. I don’t know which to follow.”