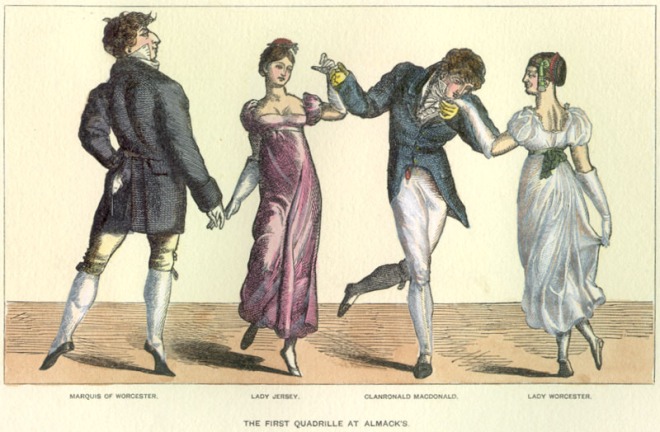 I am aware that the above image is of an upper-class quadrille, but I figure that they led a charmed existence compared with the Victorian sex workers referred to in Wilde’s deathly quadrille, so I think they can take the hit on this one.

In this poem of Wilde’s, we get another dose of heady voyeurism, such as would delight Lord Henry himself. We have an unfortunately common example of Oscar Wilde fetishizing or othering the poor and underprivileged, potentially taking advantage of the terrible conditions force some of them into sex work, for the narrator’s own voyeuristic intentions. This poem seems to be moralizing in a way that, if you had read the preface to The Picture of Dorian Gray alone you would have thought he was entirely uninterested in.

The main reason to attribute morality to this poem is by way of the very clear link between the voyeurism of the couple beholding the spectacle of the brothel and the woman being tempted into joining the spectacle. The spectacle of the brothel is partially obscured to the casual observer who might find the scene tantalising and irresistible. But as soon as one passes over the threshold they find that there is nothing but corruption and death on offer in “The Harlot’s House”.

The sex workers, who are often interpreted as all female due to their shrill voices, and the description of one clutching “A phantom lover to her breast”, attempt to behave seductively and succeed on a surface level but they are simply going through the motions, they have become just another cog in the machinery of industrialised Victorian England. They attempt to play and dance like their heart is in it, but the implication (if we are to be generous to Wilde) is that they have become jaded. If we are less generous to Wilde then he is simply viewing the poor and underprivileged sex workers as mere objects that imitate human form. For all Wilde’s dress reform advocacy and beliefs about female independence, he is still a Victorian gentleman whose advocacy didn’t quite breach class divides.

I have a question, and I would love input so feel free to email me thefrankenpod@gmail.com :

Is the “tune” going “false” the corruption of the narrator’s partner or is it simply the discovery of the true nature of the brothel? It seems like the illusion is shattered, but also it seems like enough time has passed for the dawn to “with silver-sandalled feet, [creep] like a frightened girl.“. We are told it happens suddenly, but they appear to be there for quite some time, at least outside. So is it merely voyeurism and disappointment, or voyeurism and corruption?

Among other references, I used this as a springboard.

Morgan of The FrankenPod

I think we can agree that this macabre spectacle of the brothel and the part human automatons therein is inherently a gothic spectacle with imagery such as skeletons, phantoms and ghostly apparitions used to paint the picture of the decadent and ostensibly lively Victorian brothel. The othering of the sex workers as the undead and unnatural makes them of the Creature’s kin in Mary Shelley‘s novel Frankenstein or the Modern Day Prometheus.