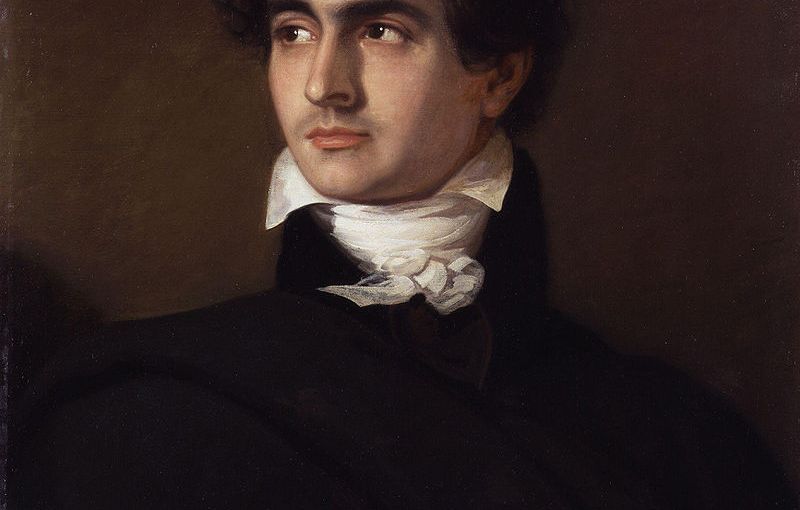 Polidori wrote his thesis on sleepwalking during his time studying at the University of Edinburgh (name-checked more than once in our Body Snatchers episode with Courtney from Cult of Domesticity). He became a qualified doctor of medicine at the age of 19.

Sleep-walking plays a role in 19th and 20th-century vampire mythology, but this isn’t attributed to Polidori. Dracula, Carmilla and Varney all use sleepwalking as a kind of hypnotic state induced by the Count.

The young doctor was employed by on Lord George Gordon Byron, to accompany him while he was on his Grand Tour of Europe which would eventually lead them to The Villa Diodati, we’ve covered that here, so I’m going to go ahead and skip this bit. Except I better mention that Polidori was paid 500 pounds to keep a diary of the exploits of the “rockstar” poet by publisher John Murray.

Byron wrote a Fragment as part of the infamous ghost story challenge, Mary started Frankenstein and both Percy and Polidori started stories that they gave up on soon after. But when Byron discarded the fragment, Polidori used it as a springboard for his novel The Vampyre. Utilizing aspects of the fragment such as the character Arthur Darvill he created a full narrative, a far cry from the discarded document. Polidori took that fragment and turned it into what is believed to be the first vampire story written and published in English. The Vampyre was published a magazine without his permission (CORRECTION ALERT: I stated he gave permission in the Villa Diodati episode but that doesn’t seem to be true) and attributed it to Byron. I’m not sure how The New Monthly Magazine got hold of the manuscript but publishers had heard of this lost fragment of Byron’s and seem to have presumed that The Vampyre was it.

Byron and Polidori both printed corrections but the damage was done, particularly to Polidori’s psyche. He had tried to appeal to Percy and Byron to help him with his writing career and Byron annihilated him. The once The Vampyre was no longer attributed to Byron the public and critical reception turned bad. People no longer wanted to read it and actively condemned it.

Excellent Public Domain Article on this By Arthur McConnell Stott

His some of his published works were his thesis, The Vampyre (attributed to Byron), a poem The Fall of Angels (published anonymously in 1921) and his diary which would only be released in edited form in 1911 by his nephew.

Mary Shelley disagrees Polidori’s actions at the Villa Diodati. In her 1831 introduction to a reprint of Frankenstein she says that it was a conversation between Byron and Shelley:

“Many and long were the conversations between Lord Byron and Shelley, to which I was a devout but nearly silent listener. During one of these, various philosophical doctrines were discussed, and among others the nature of the principle of life”

The conversation between Shelley and Polidori about “principles”and “whether man was to be thought merely an instrument” appears to have some considerable analogy with a conversation to which Mary Shelley and Professor Dowden refer, and which raised in her mind a train of thought conducing to her invention of Frankenstein and his Man-monster. Mary, however, speaks of Byron (not Polidori) as the person who conversed with Shelley on that occasion. Professor Dowden, paraphrasing some remarks made by Mary, says: “One night she sat listening to a conversation between the two poets at Diodati. What was the nature, they questioned, of the principle of life? Would it ever be discovered, and the power of communicating life be acquired? Perhaps a corpse would be reanimated; galvanism had given token of such things. That night Mary lay sleepless,” etc.

He must have really upset her, possibly when he propositioned her while she was on holiday with her boyfriend and her small child? That could do it!

Or alternately was Polidori misattributing Byron’s conversation to himself?

She also mentions Byron’s Fragment without making so much as a mention of The Vampyre, simply judging Polidori for his abandoned attempt at the lakeside Villa that night. Shelley does not owe Polidori any charity, but it is curious how willfully she avoids attributing him with even the slightest value.

Polidori, continued to be a footnote in literary and cultural history as his nieces and nephews would go on to be much more critically acclaimed; Dante (poet and artist), Willian (writer), Maria (writer) and Christina Rossetti (Poet; My essay on Christina Rossetti’s Goblin Market) Polidori never met them, he died before they were born.